Yesterday Doug and I braved the steaming hot weather and spent several hours in a boiling car driving up to Dereham in Norfolk. There were a few occasions during those hours on the road when I wondered to myself – if not out loud – why on earth we were doing this when we could be safely at home under a nice cool tree, lazily sipping a pleasant cold beer and watching the hens run about the garden, but Doug was determined to make the trip and fortunately it was well worth it once we got there. 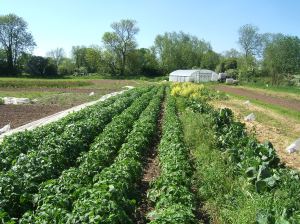 We were driving all that way in the crazy heat to go on a farm walk around a very special bit of Nelson’s county. Enterprising Sam Eglington, who runs Garden Farm Produce, has taken over 2 acres of land in Gressenhall in Dereham and has established a beautiful market garden which is grown along organic lines. When he took over the field in 2008 it was just meadow land and full of thistles. Plus he also had to contend with the fact that a year later the financial crisis hit and the bottom dropped out of the organic veg market, with many box schemes which had flourished in the years before sadly forced to fold. Fortunately due to a keen sense of business and a strong belief in what he is doing, coupled with an encyclopedic knowledge of growing, he has managed to keep going and made his first profit last year.

Sam grows a variety of crops, including potatoes, lettuces, tomatoes, brassicas (broccoli, cabbages etc.) and radishes which he sells to a local wholesaler and restaurants. He is also growing some green manure to improve the soil, including a beautiful crop of red clover which unfortunately I forgot to take a photo of. As we are busy researching launching our own venture at some point soon, the visit – and listening to Sam’s excellent advice and interesting experiences – was invaluable.

It was also interesting to meet members of a community supported agriculture project called Farm Share in Norwich who were also taking part in the walk. CSAs are popular in the US but are gradually gaining traction here in the UK. Farm Share have 100 members who each contribute a set amount every month to the project and receive a share of the produce each week, as well as volunteering there for nine hours a year. The team had five acres and recently took on another three, which dwarfs the modest one acre we are hopefully taking on next year to grow salad leaves! It was really inspiring to meet them and if you’re in the Norwich area why not think about joining their CSA?

After a two and a half hour tour of the plot in the searing heat, and patiently answering all our questions, Sam very kindly treated us to homemade flapjacks and ice-tea in the shade. How quintessentiallly English and a great way to finish off the afternoon! Needless to say there was a lot to talk about on the drive home.